The Eurasia Tunnel linking Europe and Asia under the Bosphorus Strait opens on Dec. 20. This is the longest double-story, car-only tunnel in the world. SK E&C CEO Choi Casey poses for photos with Korean and Turkish construction representatives.

[Korea.net] An underwater sea road has been newly opened to connect the Asian and European continents.

SK Engineering & Construction (SK E&C) announced on Dec. 20 that it had successfully opened an underwater tunnel that runs under the Bosphorus Strait which divides the Turkish capital city Istanbul into Asian and European sides.

The newly-built Eurasia Tunnel which measures 5.4 kilometers–long, is the first car-only, double-story, underwater tunnel of its kind on a 14.6 kilometer-long route. The firm used a huge tunnel-boring machine (TBM) which measures 13.7 meters in diameter, 120-meters in length and weighs 3,400 tons.

The two firms, SK E&C and Turkish firm Yapi Merkezi, began excavating in 2008 when they received the order. They worked over a span of two years to complete the construction, progressing seven meters every day by digging up to 25 tons of earth and sand despite the pressure being 11-times higher than that of air as they worked as deep as 110-meters underwater. 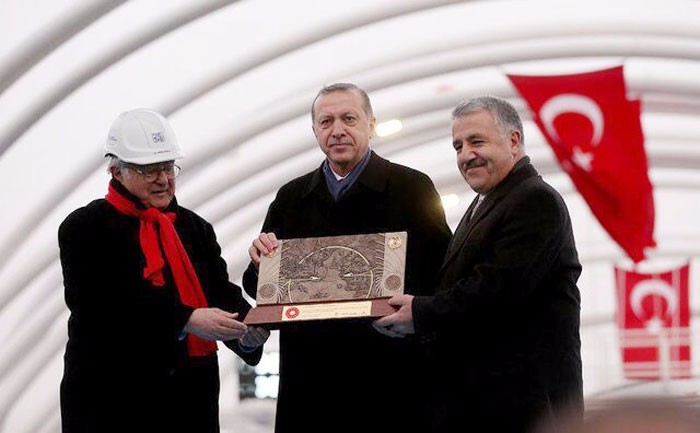 Turkish President Recep Tayyip Erdogan (center) poses for a photo while holding a memorial tablet with other influential figures in Turkey on Dec. 20 in Istanbul. 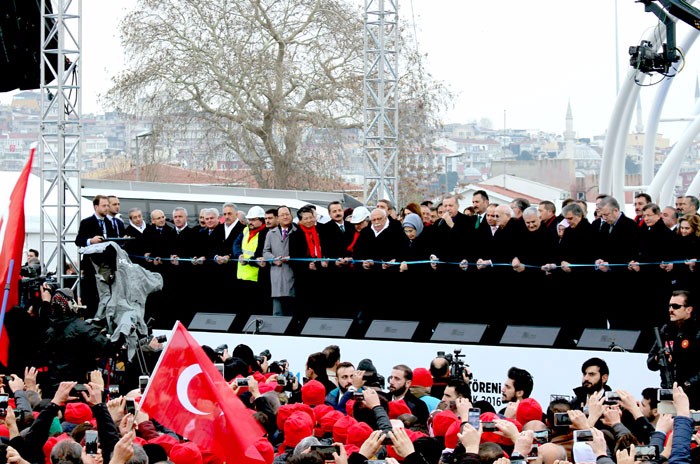 President Erdogan said at the opening ceremony on Dec. 20 in Istanbul that, “The Eurasia Tunnel will bring various benefits for the citizens of Istanbul in areas of the economy, culture, society and environment by providing a quality transportation service.”

“It will also contribute to advancing the international status of Turkey as one of the well-known tourism centers in the world,” he added.

A newly-constructed, 5.4 kilometer-long underwater tunnel, marked by green dots, is part of the longer Eurasia Tunnel (green line) which is 14.6 kilometers long and runs under the Bosphorus Strait. It connects Kazlicesme on the European side to Goztepe on the Asian side of the straits. 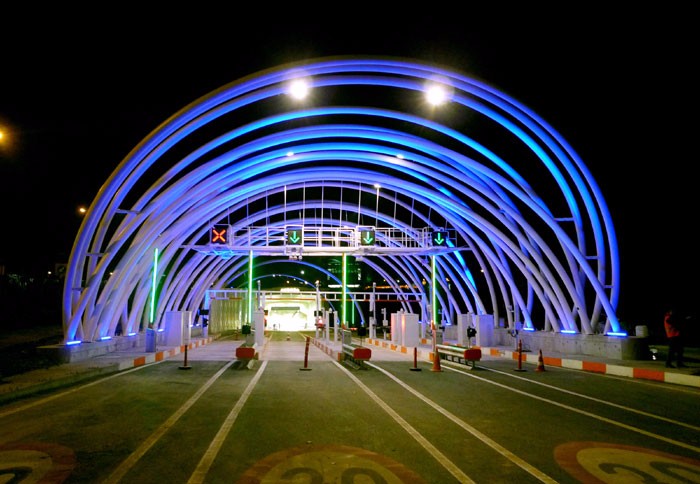 A night view of the Eurasia Tunnel.
SK E&C predicted that the newly opened tunnel will significantly shorten the transportation time across the Bosphorus Strait from 100 minutes to 15 minutes. The firm also said that on average, about 120,000 cars are predicted to use the tunnel every day. The company is also in charge of overall maintenance, repair and management, as well as the facilities after the completion of the construction by 2041.