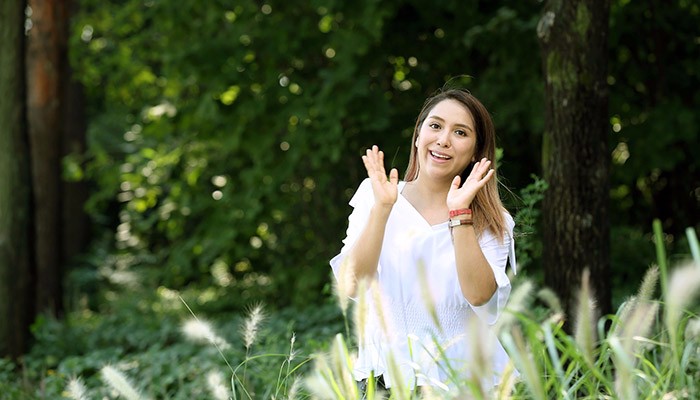 Third-year Korea University student Nalu is the creator and star of 'Latina Saram,' a YouTube channel that introduces Korean pop culture and Korean university life to Spanish speakers all over the world. With over 300,000 subscribers, Nalu was recently tapped by Korea University to be an official student ambassador for the Latin American region.

[Korea.net] Nalu is a Latina YouTube star with over 300,000 subscribers.

Originally from Peru and currently a third-year business student at Korea University, Narda "Nalu" Santana launched her popular YouTube channel Latina Saram in January last year. Her videos take you on a spin through the world of Korean pop culture, introducing the latest makeup techniques and fashion trends from Seoul. They also guide you through the ins and outs of Korean university life, with helpful tips on food, travel and cultural experiences.

Thanks to the unique content on her channel, the majority of the videos on Latina Saram have around 300,000 views each, and the channel's total number of views has reached over 14 million. With the growing popularity of her channel, Nalu has become quite the celebrity across Latin America. Last February, at a fan meeting she hosted during a visit to Peru, over 2,000 fans showed up to meet her in person.

Korea University has taken notice of her growing influence, too, appointing Nalu as a student ambassador for Latin America this past July. As part of her first assignment, she traveled with the university admissions team around Mexico this summer. Once again, she was greeted by hundreds of loyal fans.

Not only is Nalu the face of Latina Saram, she is now a guidepost for Latin American students wishing to begin their academic journey in Korea. 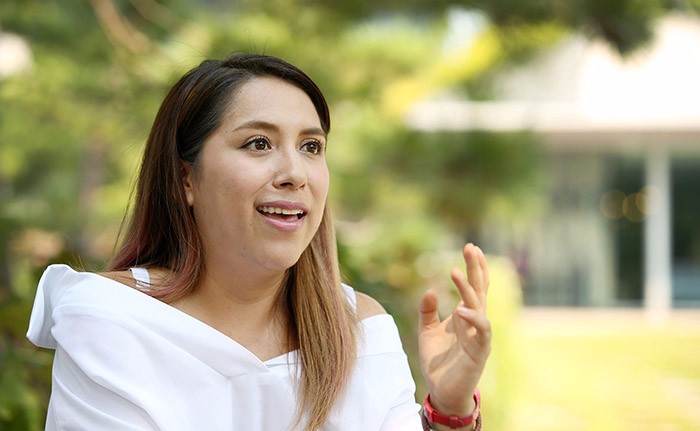 Nalu launched her YouTube channel Latina Saram to create content in Spanish that could answer all the questions Latin American fans of Korea might have about real life in Korea.

On Sept. 2, Korea.net had a chat with Nalu about how her channel came about, and what she gained from her trip to Mexico this summer as a student ambassador for Korea University. She also shared with us what she thinks might be the secret to her popularity.

- What made you decide to come to Korea?

I arrived in Korea at the end of 2014. I always say my Korean trip was never planned. I was in university in Mexico, and during the final semester, I met some Korean friends and I liked their culture, the way they spoke, the way they partied. I had a Korean best friend who told me, "If you ever come to Korea, you can stay with me." The next semester, after she left, I wondered what if I were to go and try it. So I decided to take one semester off, and came to Korea with plans to see the country and learn the language for three months.

Once I got here, I met a director at a tech startup during a business networking event. When I told him about the opportunities in Latin America, he hired me for three months to work with them. I ended up working there for one year. After that year, I was about to renew my contract, but a friend reminded me I only had a few semesters left of school, and advised me to finish university. So I made the decision to transfer from the Mexican university to Korea University in Seoul. That's how I began my studies here.

- When and how did your YouTube channel come about?

I opened my YouTube channel in January 2015. My YouTube channel was going well, and I was collaborating with other companies on some projects, so I thought I could keep it as my part-time work while I continued studying.

- Was your YouTube channel called Latina Saram back in 2015? Was the concept there from the very start?

When I was in Mexico, I met so many fans of the Korean Wave, or Hallyu, and people who loved Korea, and because I studied business I saw an opportunity no one had yet tapped into. I saw so many young women who were into the concerts, the makeup, the dramas. In Mexico, where I was living, I heard from Latin Americans that there wasn't enough content to satisfy demand.

In Mexico, I didn't have the confidence, and I wasn't sure people wanted to watch a Latina talk about Korea in Spanish, so I waited until came to Korea and tried to convince some of my friends be in my videos. None of them wanted to do it, however, so I decided to just do it myself. Fortunately, it all went well.

- Your original target audience was fans of Korea in Mexico?

Not necessarily. Fans come from everywhere. It's now concentrated more in Mexico because Mexico is one of the biggest countries, besides Brazil, in Latin America.

- From which countries are most of your subscribers?

-Is this why all your videos are in Spanish?

The videos are for Spanish-speakers in general. I have fans from all over the world. These days I've started adding subtitles to some of the videos, but because I do everything, from filming to editing, sometimes I don't have time to edit all of them. I've added English subtitles, and Korean subtitles, too, in some videos, because I want to make them available to Korean viewers, too.

-Is your Korean fan base starting to build, too?

I have some. Some of them write to me. They're mostly Koreans that are learning Spanish, and they're the ones watching my videos. When I filmed a video at a university, I was surprised because I met a student from Korea University, who's a Spanish major, who knew about Latina Saram and he had watched all of my videos. 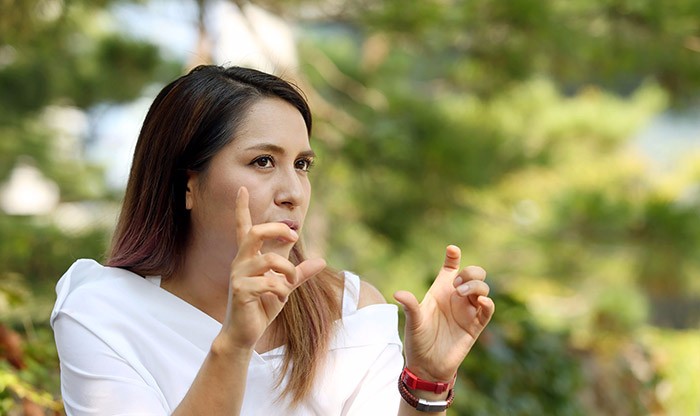 Nalu stars in and creates all of her productions, from filming to editing. Most of her videos are in Spanish, but recently she has begun adding English and Korean subtitles.

-How do you come up with concepts for your videos?

I try to listen to what my audience wants. Eighty percent of my audience is female and I have a good idea of what young women want. Sometimes I just come up with ideas, other times I get ideas from other videos on the web.

Once the idea is set, I find people to help me. Sometimes I need staff, or other people to star in the video.

- Did you always enjoy making videos? Did you have everything ready when you first started?

Not at all. When I first started, I didn't even have a camera. I didn't know how to edit. I was very lost. For my first video, I asked a coworker at the office to say, "Hi," for a video I recorded on my cell phone. A friend lent me his iPhone, and another friend helped me to edit. Then, after one or two months, my friends didn't always have the time to help me out, so I had to start doing it on my own.

Before I reached 100,000 subscribers, I didn't buy a camera. After I went over that, I felt the need to buy some equipment. Even now, I don't have a lot and I do everything myself.

- Why do you think your YouTube channel has gotten so much attention?

Honestly, I'm not sure. There are so many factors because when I first started, there weren't a lot of other channels in Spanish about Korea or Asia in general. There must be around 20 channels now.

I think what makes my channel the one with the most followers - we're at 300,000 now - is that I try to connect with my viewers. I always imagine I'm speaking with my sister, with my family, and I try to make jokes and be myself. I also try to do something different, to bring Latina Saram up one step with each new video.

- We hear you get a lot of fan mail these days.

I want to inspire them. I always tell them that you have to work very hard. It's not just luck. It's effort. You need to at least speak English, and Korean, too, of course. In order to work, you need to have a lot of experience. I try to encourage them, but I also tell them they need to put in the effort.

- How good is your Korean?

-Does your channel have a set schedule?

I try my best to upload a video every Thursday or Friday, but sometimes I can't because I need to study or work. I try to be consistent though.

It is, but I like it. For a while, I was under a lot of stress, but then I realized I need to be happy doing this. Right before heading to Mexico, I was very stressed because I was obsessed with getting a viral video, when you hit 1,000,000 views in one week. So I was extremely stressed, and if a video didn't hit 100,000 in two days, I would get frustrated. I wasn't sleeping, and I felt I needed to compete with other channels that have popped up in recent years.

While I was on the Mexican tour, I took some time to relax and rethink things. Now, every time I get lost, I check the messages I get from my subscribers on social media, just to keep it real. 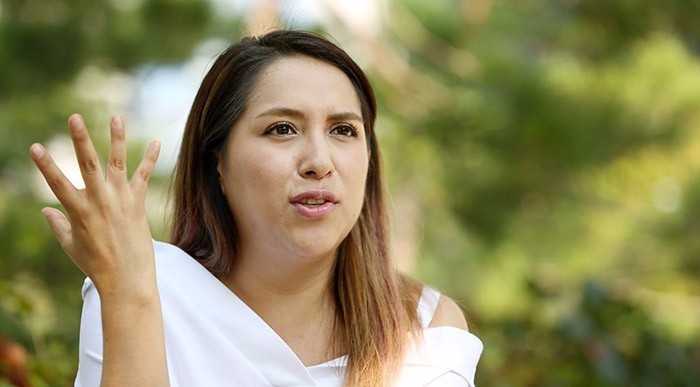 This past July, Nalu is appointed as the Latin American student ambassador for Korea University. As part of her first assignment, she went on a university tour in Mexico and was greeted by hundreds of her fans. Overwhelmed by the interest, the university created 20 new scholarships for Mexican students wishing to study at the school.

-What were some other outcomes of your Mexican tour?

Many of my YouTube fans were in the audience that day as well. If, through my channel, other students get the opportunity to study in Korea, or to visit the country, that's what I find to be the most rewarding. I feel that's what my subscribers get from my channel. I get comments from them saying, "You inspire me," or, "Thank you for creating this opportunity," and that makes me happy.

-What is your vision for Latina Saram?

Latina Saram, for me, is showing Korea to Latin America, and vice versa. I want to be the bridge between Korea and the Spanish-speaking world. That's the goal for my channel.

-Lastly, are you enjoying your moment of fame?

I never feel like I'm that famous, not in Korea anyway. Though, in Mexico, because I promote Korea in Spanish, people sometimes ask to take pictures with me. Really, though, it's the fans that count. During the Korea University tour, so many of my fans showed up outside the venues that the university organized a fan meeting for me, for some 900 people. Those people are giving me their time, and for that, I'm always grateful.

Korea gave me work, education and my close friends. I'm very grateful to Korea, too. 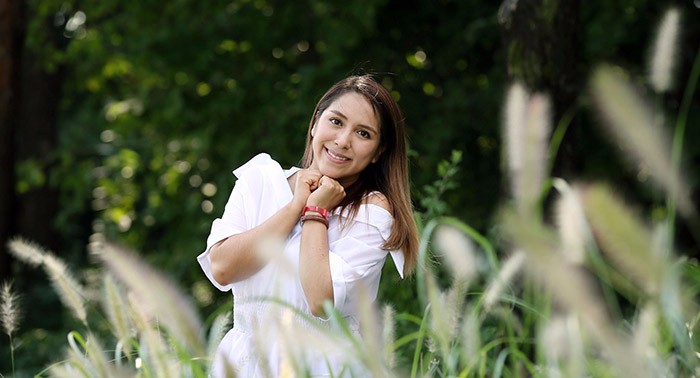 Nalu hopes that more Latin American students will get the opportunity to study in Korea by following her YouTube channel Latina Saram.